NEWARK — As evidence mounted that Newark’s drinking water was contaminated by lead, top officials began an urgent giveaway of tens of thousands of filters and told residents that the problem was limited to one of the city’s two treatment plants.

But city documents and other records show that an engineering study that led to the distribution of filters, which was made public in October, only focused on one plant. Now the state is directing Newark to assess whether treatment methods at the second plant are protecting water from being contaminated by lead. Since 2017, samples of tap water taken at residences served by that plant have shown elevated lead levels.

The extent of Newark’s water problem is still unfolding. For nearly a year and a half after high lead levels were first discovered in the water system, Mayor Ras Baraka and other officials blamed aging lead pipes, insisting on the city’s website that the water was “absolutely safe to drink.”

But Newark changed course after the study found that lead was leaching into the water because of ineffective corrosion treatment at the city’s Pequannock plant. Since July, lead levels in more than half the samples tested at homes served by the plant have exceeded 15 parts per billion, the federal threshold for action.

A review of city records, obtained through a public records request, shows that lead levels recorded since January 2017 in neighborhoods served by the second plant, the Wanaque, were not nearly as high. Still, those levels, including a few above 15 parts per billion, were among the highest from the Wanaque in the past decade. One sample of residential tap water that came from the Wanaque tested at 182 parts per billion. Two of the dozens of city schools found to have high lead levels in their drinking water two years ago are served by the Wanaque. 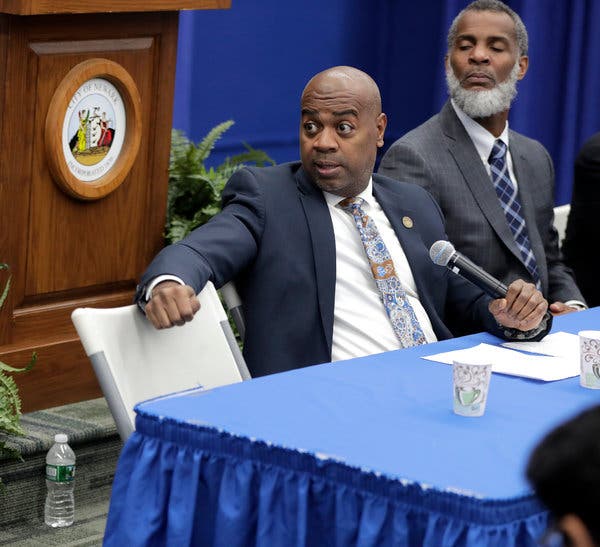 Mayor Ras Baraka has defended Newark’s response to the lead problem and has rejected comparisons to the crisis in Flint, Michigan.CreditJulio Cortez/Associated Press

In a recent letter, state regulators also asked Newark to investigate whether elevated levels in the Wanaque service area are caused by water leaks from the Pequannock — the two water systems border each other at certain points. The city, in a written response to the state, said “blending is occurring” between the systems, most likely when pressure valves are opened during emergencies like fires and water main breaks.

City officials said the plan to distribute 40,000 filters was aimed at neighborhoods served by the Pequannock because so far there was no evidence that corrosion control was not working at the Wanaque.

“The conclusions that we have are saying that the Wanaque system is not as affected as the Pequannock,” Mr. Baraka said in an interview, adding that the city had focused on areas “we know for a fact have been affected by this issue.”

“The areas we are not sure about, we’re telling them to continue business as usual,” he added. “If you feel like you want to get tested, get tested. In the meantime, we’re going to continue our overall study to make sure what we’re saying is 100 percent accurate.”

But the Natural Resources Defense Council, which sued Newark and the state in June, accusing them of violating federal safe drinking water laws, said the city was downplaying lead levels in neighborhoods, like the East Ward, that were served by the Wanaque. More than a fifth of samples tested at residences served by the Wanaque in the second half of last year yielded levels above five parts per billion.

“To hand wave and say there’s no problem when there are numbers above the federal threshold, and when they haven’t taken a recent hard look at how the corrosion control is working, is inappropriate and deeply concerning,” said Erik Olson, senior director for health and food for the environmental group.

No amount of lead exposure is known be safe for children, whose mental and physical development can be impaired, according to the Centers for Disease Control and Prevention.

And many experts say that the federal action level of 15 parts per billion, established in 1991, is outdated and fails to take into account new research on the effects of lead exposure.

“It’s based on old, old science,’’ said Dr. Jennifer Lowry, a toxicologist at Children’s Mercy Hospital in Kansas City, and chairwoman of the American Academy of Pediatrics’ council on environmental health. “We know so much more now.’’

Today, Dr. Lowry added, “a health-based standard” would “certainly be below five.”

When Newark’s filter distribution began, the city’s website described water in homes in the East Ward as “safe.’’ A week later, the safety reference had disappeared, but language remained stating that residences served by the Wanaque “do not require a filter under this program.”

At recent community meetings, city officials have said that anyone can request a water test and would receive a filter if lead levels exceeded the federal threshold. Officials declined to say how many water tests had been requested or performed since the distribution began. Last spring, the city also announced a plan to help residents replace lead pipes connecting the city’s water main to residential plumbing systems.

Mr. Baraka has defended the city’s response, chafing at suggestions that Newark’s problems echo those of Flint, Mich., even using the hashtag #NewarkIsNotFlint.

The state said it would wait for the city to complete its new assessment before answering questions about the Wanaque.

The Natural Resources Defense Council questioned why the Wanaque had not already been studied and said the state had done a poor job of oversight.

“The state is playing catch up,” Mr. Olson said. “There were all sorts of indications at least as early as 2014, 2015 that there were problems.”

“I cannot believe they’re not giving out filters in the East Ward,” she said.

After she and her husband, John, moved to the neighborhood from Queens in 2016, their 2-year-old son Theo’s blood lead level was measured at 6.6 micrograms per deciliter, above the recommended limit of 5 for young children set by the C.D.C. When city officials tested the family’s drinking water in January 2017, they found lead levels of 9.77 parts per billion. 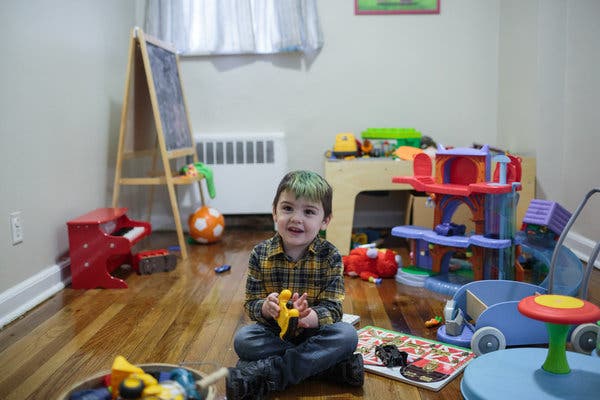 The Fienbergs immediately stopped drinking from the tap. Three months later, Theo’s blood lead level fell by half. Ms. Fienberg said she was relieved, but felt guilty that she had let him drink the water in the first place.

“He’d wake up at 6 and the very first thing I’d do would be fill his sippy, half water, half apple juice,” Ms. Fienberg said. “Now I know, with lead, that very first cup of water from the tap is the worst.”

Theo was later diagnosed with autism and a form of attention deficit hyperactivity disorder. The Fienbergs do not believe either was caused by the lead exposure but that it did exacerbate his symptoms.

Their younger daughter was born without complications, but the family soon moved to Elizabeth.

“I told all of my friends, they thought I was crazy — I told them to have their water tested,” she said. “Nobody listened.”